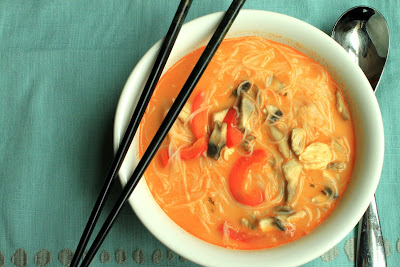 I'm such a fan of Thai food.  I love me some red curry, coconut milk, and lemongrass.  Yum yum yum!  So, last week, while I was flipping the pages of a food magazine, I became completely mesmerized by a photo of Thai soup.  Gone were my plans to post a recipe for delicious Southern style black-eyed peas, ham, and collard soup. Gone were my plans to try out a soup made creamy by the addition of hummus.   Every other recipe just seemed so boring by comparison.  { insert dramatic sigh here}

Fast forward a few days, and I'm happy to report that this recipe was deserving of my fixation; it's just so, so good!  We loved it, and I couldn't stop sneaking spoonfuls of the broth when I was putting the leftovers away.  Once you have the veggies and chicken sliced up, it goes together pretty quickly, so this recipe would make a great weeknight dinner.


Heat the vegetable oil in a large pot over medium-high heat. Add the shallot and cook, stirring occasionally, until softened and lightly browned, about 3 minutes. Add the garlic and curry paste and cook, stirring, 1 to 2 minutes. Add the chicken broth, coconut milk and fish sauce; cover and bring to a boil.
Add the bell peppers, mushrooms, and noodles and simmer, uncovered, until the noodles are al dente, about 3 minutes. Add the lemongrass and chicken, and simmer until chicken is just cooked through, about 3 more minutes. Stir in the lime juice and cilantro, and add more fish sauce, if desired**.


** Note 2:  When you taste the broth at this point, if it tastes like it could use more salt, try adding 1/2 Tbsp. fish sauce.  I did, and it tasted just right.  My total fish sauce for the entire recipe was 1 1/2 Tbsp.


*** Note 3:  Rice noodles tend to get mushy if you leave them in broth in the fridge.  When you package up your leftovers, keep the noodles and broth in separate containers.  Add the noodles back in to reheat.
Ingredient Lineup:
Remove the noodles from the broth before storing leftovers. 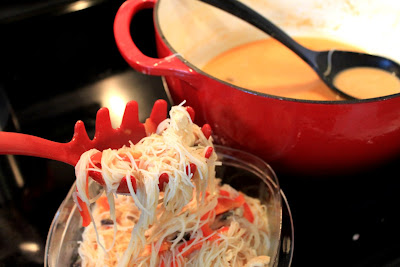 Yummy in my tummy. 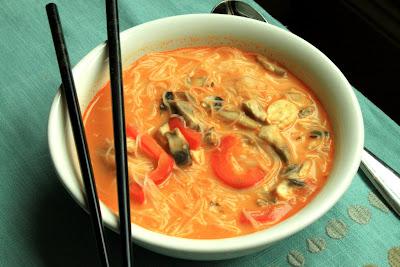