Attention, please!  Raise your hand if you're incapable of eating just one cookie off the still piping hot baking sheet.

Please tell me that I'm not the only one who has zero willpower when it comes to a tray full of warm cookies!  I can be utterly diligent with my meals and snacks all day, but put a tray of homemade cookies in front of me, and I'll inhale 7 of them before I've realized that my hand was even moving to grab them.  It's awful.  So, you can imagine how much I struggle with this food rule: 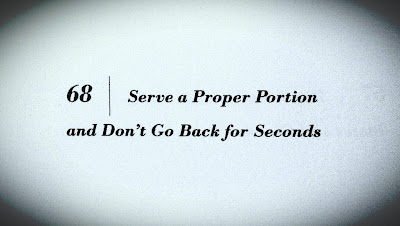 And I'm pretty sure that it doesn't mean I should grab all 7 cookies at once, haha.  One easy way to keep desserts portion controlled is to divide them into dishes as you make the recipe.  And what better portioned out - and pretty - dessert than a layered pudding?  Dividing this recipe into individual glasses keeps me from sneaking spoonfuls and not paying attention to how much I'm actually eating.  Perfect!

The other thing to note is that by using unsweetened almond milk instead of dairy milk, we shave nearly 200 calories off the recipe.  I use almond milk for a lot of things (ranch dressing, even), so I was excited to make a treat that was not only nondairy (aka "Sara-safe"), but one that saved me a few calories to boot.  You can go ahead and make this recipe using dairy milk or a mix of dairy and almond milk; it's up to you. 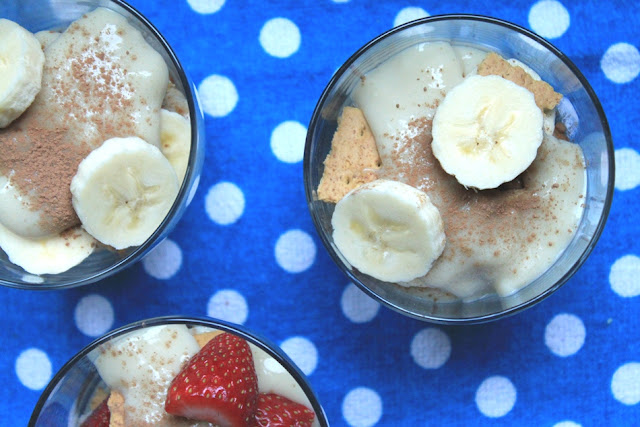 Heat the almond milk in a saucepan over medium heat until almost simmering, whisking often.  Meanwhile, whisk the cornstarch, salt, sugar, and egg in a medium heatproof bowl. Temper the egg mixture:  Pour about half of the hot milk into the bowl and whisk vigorously until smooth. Pour the egg-milk mixture back into the saucepan and cook over medium heat, whisking vigorously, until thick and starting to bubble, 1 to 2 minutes. Remove from heat and whisk in the vanilla. Transfer the mixture to a bowl and let cool, stirring occasionally.  The pudding will continue to thicken as it cools.

While the pudding is cooling, cut the bananas into thin slices. Layer a few banana slices, a few pieces of graham cracker and 2 tablespoons of the prepared pudding in each of 4 glasses; sprinkle with cocoa or cinnamon, then repeat to make 2 more layers. Cover with plastic wrap and chill for an hour. Makes 4 servings. 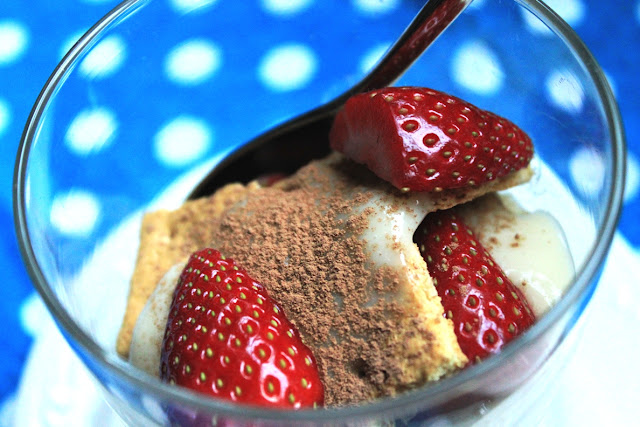 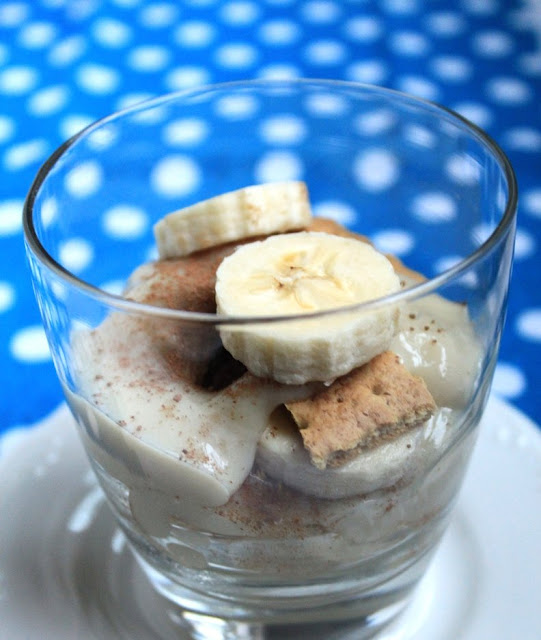 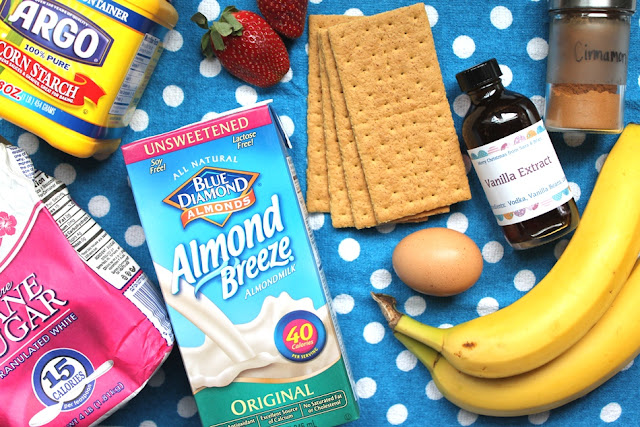 Tempering the eggs isn't as tricky as it may seem!
Just think of when your hands are frozen on a cold day, and the last thing you should do
is put them straight into hot water.  Ditto for eggs! 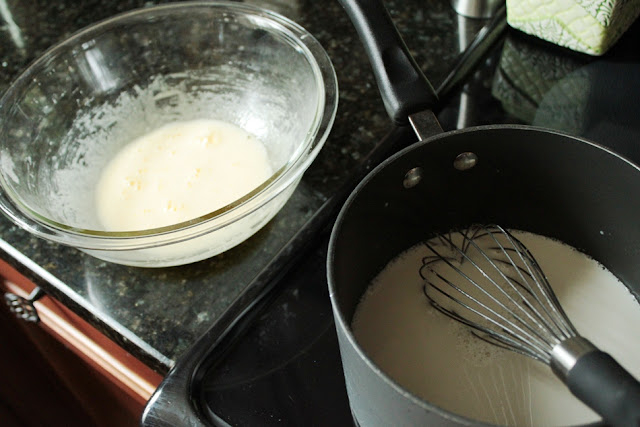 You'll put a little of the hot mixture into the cooler eggs, whisking to mix in evenly. 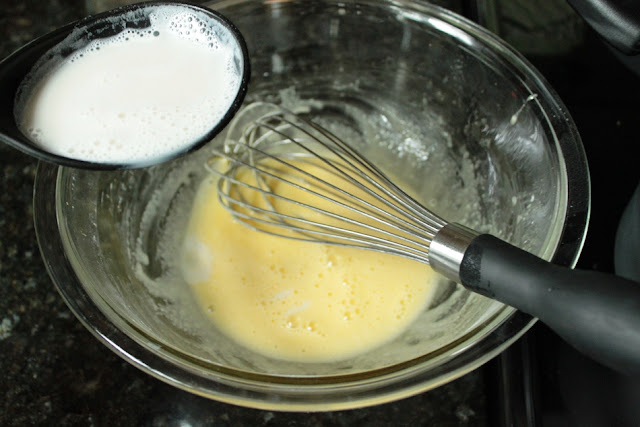 Then you'll whisk the warmed up egg mixture into the pot on the burner
to bring the entire milk-egg liquid up to boiling. Tempering accomplished! 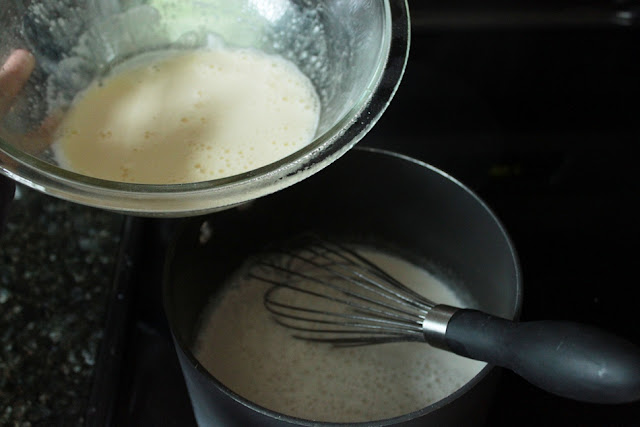 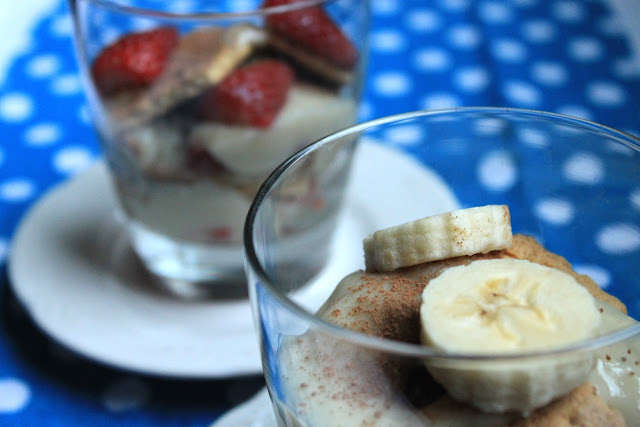