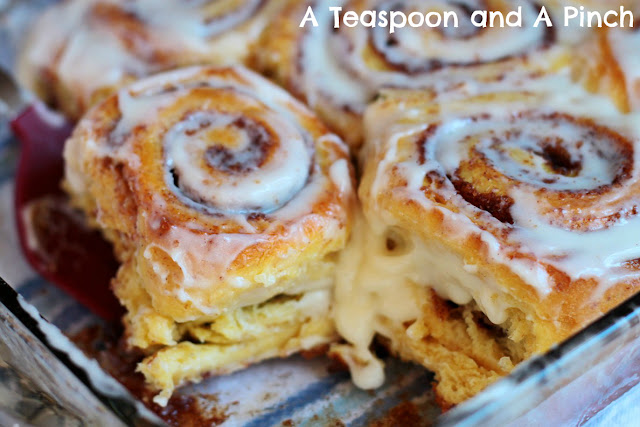 I fully intended to make these for Christmas morning.  But then, on Christmas Eve, I started feeling sick, and was freaked that I was coming down with a case of Strep Throat that all of the neighbor kids were spreading around.  So, on Christmas Eve, I sat on the couch with a mug of hot water with lemon, honey, and cinnamon.  And the next morning, I was fantastic without a trace of a soar throat.  Fantastic, but definitely lacking in the cinnamon roll department.


So, I put it off and put it off until I finally got my act together this morning.  I figured a chilly (wind chill of 17 degrees kind of cold) Sunday morning was the perfect time to make these.

At one point in time, I went through a slew of recipes, trying to find my favorite cinnamon rolls.  These came out on top, and I've been making them ever since.  That said, I would like to change a few things about this recipe (that packaged pudding mix will be the first to go!), but until that day finally arrives, I thought it would be nice to share these with you.  Maybe they'll warm up a cold morning for you too? 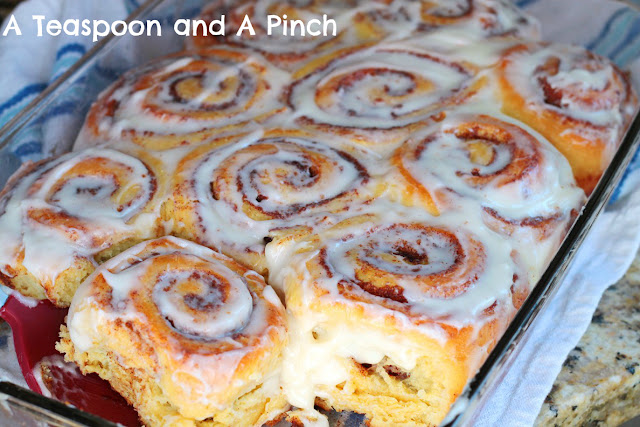 Combine milk, water, and butter in a small saucepan over medium-low heat, stirring often until butter is melted.  In a large mixing bowl, combine dry ingredients.  Add liquids and the egg to the dry ingredients, combining with the dough hook attachment.  Knead on low for a few minutes.  The dough will be sticky but will come together in a shaggy ball.  If your dough is more like cookie batter, knead in additional flour, a few tablespoons at a time.

Scrape dough into a lightly greased bowl and let rise until double, about 1 hour.  Punch dough down, and then turn dough out onto a lightly floured surface.  Roll dough into a 10x17" rectangle.  Spread with softened butter.  In a small bowl, stir together brown sugar and cinnamon, and then pour evenly over butter onto dough.

Roll up dough into a log, beginning with the long side.  When rolled, pinch the dough edge to the log, then use a sharp serrated knife to slice log into 1 1/2" slices.  Place dough slices into a buttered 9x13" pan.  Cover loosely with plastic wrap and let rise until puffy, about 1 hour.  (Alternately, if you'd like to prep these rolls at night and bake them the next morning, place dough slices into buttered pan and cover with plastic wrap and refrigerate.  The next morning, take rolls out of the fridge for at least one hour to raise until puffy.)

While dough is raising, preheat oven to 350 degrees.  Bake rolls for 15-20 minutes, until the tops are golden and the edges are toasted.  Top warm rolls with Cream Cheese Frosting

Cream butter and cream cheese until combined and fluffy.  Beat in powdered sugar and vanilla until smooth. 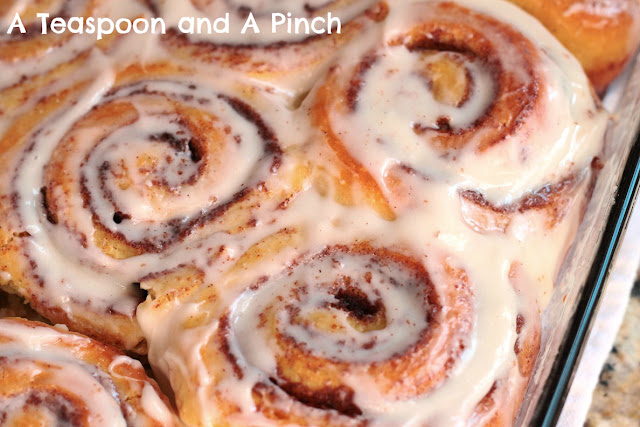 A trick for raising yeast dough when your kitchen is cold and dry:
Bring a  glass bowl of water to a boil in your microwave.  Then place the bowl of dough next to it
and let it rise - with the boiled water - in the steamy, warm microwave. 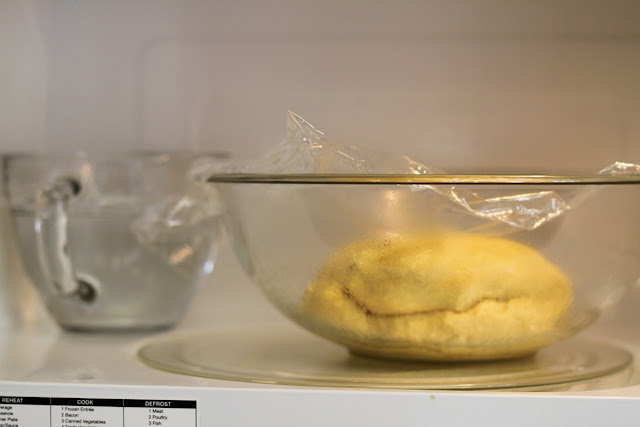 Before the first rise: 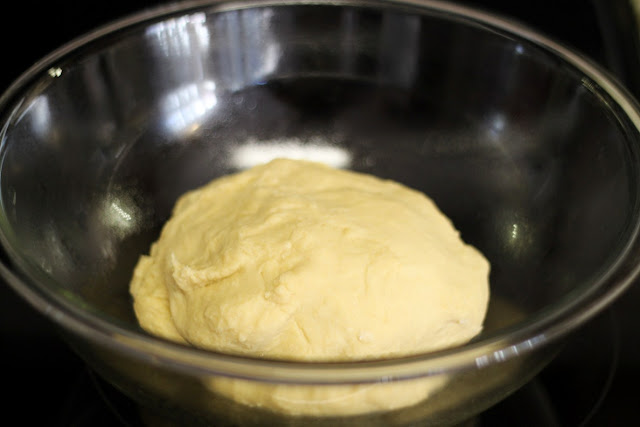 After the first rise: 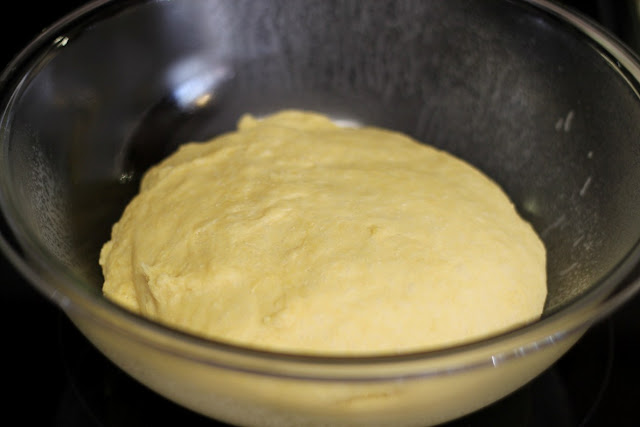 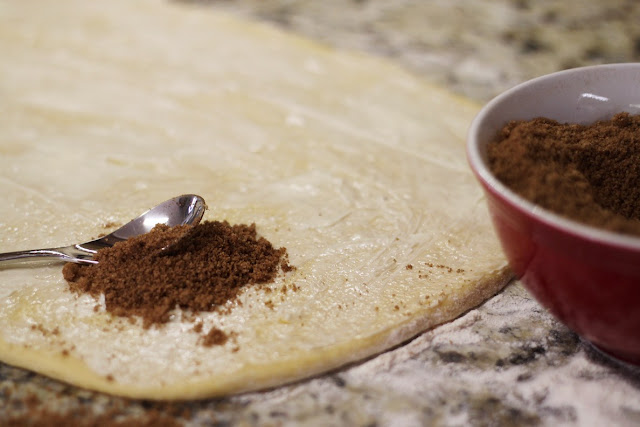 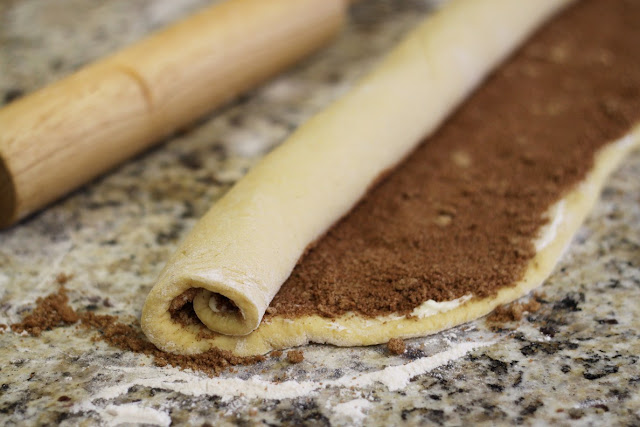 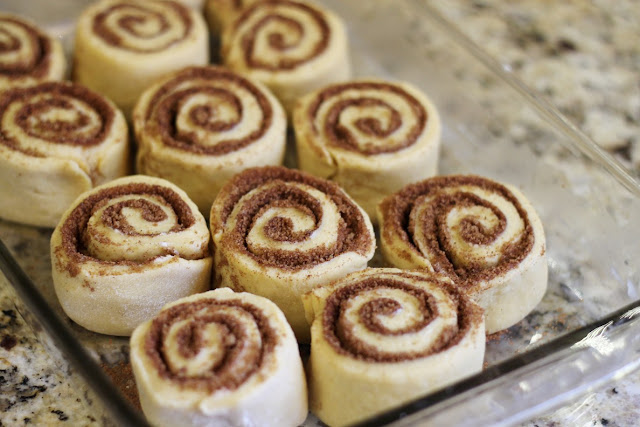 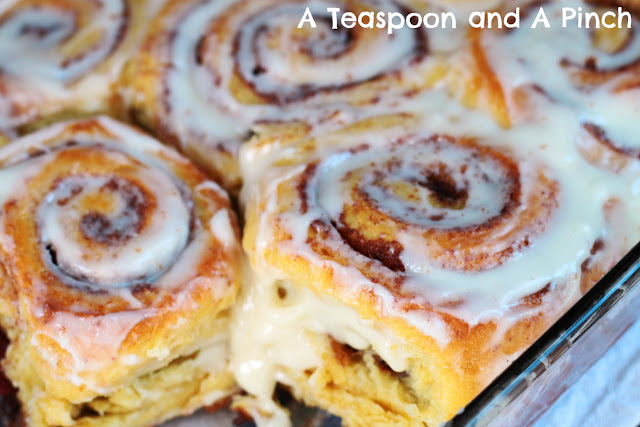