I found this recipe in kiwi magazine - it was a feature called Cooking with Kids - and while I had plans to make this with my oldest Jakob on the day that we were to do it - he also wanted to go to the park, splash pad and to have an ice cream.

So I did it myself really quickly.

The kids really loved the shrimp - there was not a single one left - Hubby and I thought that they were a little bland. So next time we are going to make a few changes...

Since I was in such a hurry - I didn't make sure to.


In a large bowl combine shrimp (I used teeny tiny little ones since my kids love them) with garlic, lime zest, 2 Tbsp lime juice and salt.

Refrigerate until ready to cook.

Drain and rinse the beans in a strainer. In a medium bowl combine everything.

Refrigerate until ready to serve.

With tongs or a slotted spoon, transfer shrimp from the marinade to the skittle, spreading them evenly and reserving the marinade. Saute shrimp for 1 to 2 minutes per side, depending on the size of the shrimp, until it turns pink. After shrimp had cooked about halfway through on the second side, add the reserved marinade and continue cooking for about two more minutes until all the shrimp is cooked through.

Transfer the shrimp to a bowl and gently toss with 1/4 cup cilantro.

Serve the shrimp and salad with sour cream and hot pepper sauce if desired.

We ate every single bit of salad (Which my kids were really confused about. What? There's no lettuce in this?) and shrimp - the sour cream and hot sauce was a really good addition and even the kids loved it.

This is going into my dinner rotation - with the changes mentioned above.

P.S. We did have a ton of summer fun: 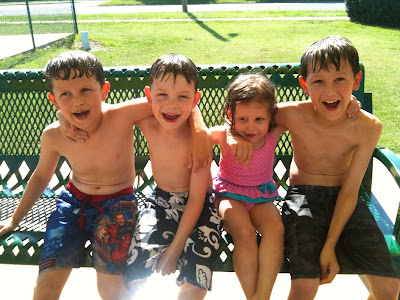 Posted by Unknown at 1:00 AM
Labels: beans, Mellisa, shrimp